The S.S Olympus was a shadow of her former self, it was almost, Rhea thought with a sharp pang, her charm had died with her skipper.

Rhea did not remember much of her father, all he was now was a ghost in her memory. There were vague snapshots, buried somewhere deep in her head; a warm smile, a gentle hug, a kiss on the cheek. A wave goodbye…

She was just three when his body was found, in the wreckage of his submarine.

The quiet ebb and flow of the sea felt unnaturally quiet. It had been so long now that she’d forgotten what it felt like to be alone. She almost expected her mother to cry out, another one of her episodes starting again. That was one thing she did not miss, though the loss of her mother still cut a gaping hole somewhere inside Rhea.

Happy thoughts, Rhea, she murmured to herself. 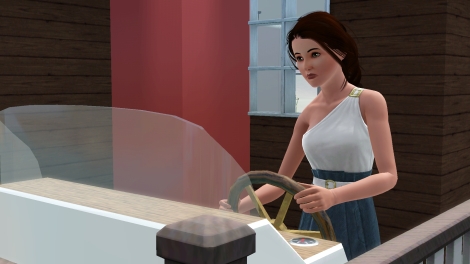 Boat and ocean seemed at harmony as the curved bough of the S.S Olympus cut through the clear water. Every now and then, Rhea would check her charts. It had been two weeks of almost non-stop sailing. Her rations were running low. She had to be close.

Another half-day of pure sailing and the spray jumping out from beneath the boat warmed and the smell of lush greenery filled her nostrils along with the distinctive salty one of the sea she had become accustomed to. Land began to form in the distance and soon Rhea found herself drifting through an archipelago of small, flourishing islands; all covered in a dense collection of vines, trees and flowering shrubs. 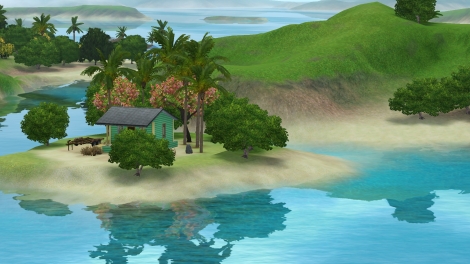 She turned away from the wheel and found the library-printed information of her new mooring.

It was, the leaflet reported, a small but beautiful port off the main island. It was also the cheapest mooring there – housing prices of any kind had rocketed since the tourist industry took over the islands.

By the time the S.S Olympus reached her new home, the wispy clouds hung purple in the sky and the whole of Isla Paradiso bathed in twilight. The only audible sounds were the waves lapping against the cool sand, and the muffled voices of an elderly couple talking at the mooring net to her. With nothing better to do, Rhea walked over to the couple and politely cleared her throat.

“Hello,” she said, trying to give a good first impression. “I’m Rhea. I’ve just moored up next- er… next-port I suppose,” she added hastily with a nervous laugh.

The man seemed oblivious of Rhea’s sudden social awkwardness (most probably caused by her extended time at sea). “Hello, dear. I’m Chiron and this is my wife Aella.”

“I don’t suppose you know where the nearest supermarket is, do you?”

Rhea’s sleep-filled eyes scoured the newspaper the next morning. There must be someone somewhere in this town looking for a young employee.

Ideally, she would like to work with children, but she knew this was unlikely with no high school diploma and a very short CV. A second choice would be somewhere in the arts industry, but beggars couldn’t be choosers, and she was in no position to be choosey.

She turned the page with a light rustle and was drawn to a small advert in the bottom right-hand corner of The Island Gazette:

When the other teachers need help grading papers and erasing chalkboards they turn to you. You are well liked by the school staff because of your calm demeanour, punctuality, and reliable nature. Just remember to keep your hall passes locked away or you’ll be the one staying after school for detention.

Apply at the school for more details

The possible amount of required qualifications swirled around in Rhea’s head. A Teacher’s Aide was certainly a big step-up from the other crummy low-paid jobs listed in the newspaper, therefore had to be worth a shot.

With a pitifully small wad of money left in her purse the financially safest way to travel by road right now was to call a cab. They were a sickening yellow colour, but came quickly and didn’t charge too much.

Driving through the central plaza of Isla Paradiso brought mixed emotions to Rhea. As they drove deeper into the heart of the island, more things became familiar to her from the pictures her mother had shown her as a child.

Brightly coloured buildings encircled a park which, she was delighted to find, still played host to the seasonal festivals that created the setting for so many childhood stories. Rhea knew for a fact that Sunset Valley had never become a home for Gaia.

The feeling of loss, still very much raw in her head and heart came flowing back.

One day, she told herself, let go for one day.

The school and stadium (an odd combination, in Rhea’s opinion) were a combined building right on the outskirts of the town centre. By the time she arrived, there were still a few late-comers sprinting for the back door in hope to make a subtle entrance.

The principal of both elementary and high schools was a stern middle-aged woman called Ms Chadwick, and her office seemed to reflect her personality.

It was a no-nonsense type of room (is there such thing?), book cases lined one wall and awards plastered the other, all carefully polished and arranged. Rhea squinted at the little brass plaques as she waited. To her left sat an old-fashioned chess table, challenging her, as if the only way to get through to the principal was via a game of chess.

However the most disturbing object in the room was a model skeleton. She wondered whether Ms Chadwick actually ever had time to use it or if it was just there to scare the students, which was a likely possibility considering Rhea’s first impressions of the woman.

The interview process itself was vigorous and tiring. There were even several rather personal questions asked, such as “Why did you drop out of high school?” To which an offended Rhea replied “Because my mother was sick,” and luckily no more was said on the matter.

It was obvious that her possible new boss was unimpressed with Rhea’s efforts, and Rhea found herself having to defend her lack of experience more than she had expected; she had to remind herself to keep her voice at a professional level.

“Well Rhea,” Ms Chadwick said when the ordeal was over, “I like your enthusiasm but your – ahem – qualifications are just not good enough for any teaching job, really.”

Rhea braced herself; it was always going to be a long shot anyway.

“However you are young and have a lot to learn. And for this reason I will give you a job as a playground monitor. The pay will not be as good, of course, and I will enforce a few conditions.”

Rhea let out a breath she had been holding for a long time. Who cares about the conditions? She had a secure income now.

“Thank you,” was all she could say.

“Yes, but I will be expecting you to apply for an online teaching course that, if everything goes well, will allow you to progress to say, a teacher’s aide.”

“And there’s one more thing, you’ll have to start tomorrow.”

The sooner the better!